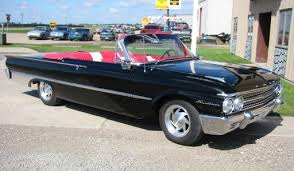 When I was sixteen years old, my step-father, the conservative banker, bought a new car. His previous one had been an English Ford Anglia, a car that made a Checker cab seem sporty. So my hopes for something cool to drive with my new license were limited.

He commuted from the Maryland suburbs into Washington every day and even then traffic was a somewhat organized fracas. He knew all the short cuts and detours and was quite good at navigating his way to work. And because of that daily challenge, he, as he told the Ford salesman, liked “a car with zip.” He came home with the car you see pictured. Not this precise one, but an exact duplicate except for the mag wheels. And because he liked what he called “zip”, the salesman kindly included a 390 cubic inch Police Interceptor engine and modifications and a 3-speed manual transmission. I was absolutely certain this car would get me laid. It didn’t. But on several occasions it got me screwed.

Occasion 1 was my first speeding ticket. Route 50 in Parole, Maryland – aptly named because that was what I was on with my mother for a long time after. I saw the cop entering the highway well behind me. I knew the curvature of the road would put me almost instantly out of his sight, so I never slowed down. Mistake. He had the same Police Interceptor, and he did.

But that was just the warm-up. My coup was actually hitting a traffic-directing cop with the right front fender of the car, knocking his butt to the pavement, and getting away with it.

My best friend and I from military high school were cruising the local public high-school trying to achieve the getting-laid goal. Bethesda-Chevy Chase High School at quitting time was always chaotic. The school fronted on the four-lane East-West Highway and to go east, you had to turn left in front of two lanes of traffic going west and merge into the two lanes going east. The city provided a traffic cop to prevent the inevitable result of teenagers in cars grappling with optimistic opinions of their driving ability. So there I was, first in line, top-down, exhaust gurgling like liquid testosterone, my friend in the passenger seat with his arm on the door, looking cool. The cop stopped the four lanes of traffic in both directions and blew his whistle for me to make my left turn. So I started forward to go out and around him which I, as a recent graduate of Driver’s Ed, I knew to be the proper protocol.

The cop blew his whistle like Louis Armstrong with a trumpet, threw up his hand in an angry “stop” gesture, and then waved his arm, signaling me to go in front of him. By that time I had pulled out too far to make that turn successfully, so being the polite young man I always was, I rose up over the windshield and said, “But officer, there’s not enough room.” His response was another whistle and more angry arm-waving. I sat down, shrugged, turned the wheel as far left as possible, and popped the clutch.

After he hit the pavement, I knew there would be trouble so I didn’t leave the scene. I just edged forward to get to the side of the road and await the consequences. The cop thought I was making a low-speed getaway and chased me, grabbing my friend’s arm and holding on while trotting next to the car. Did I mention that the officer might have been a little short and pudgy? Probably why he was assigned school-crossing duty. In any event, he had to work at keeping up with even a slow-moving car and needless to say, he was pissed.

I got a very serious ticket and an escort home to make sure my parents were clearly advised of my criminal behavior. My mother did not take this new infraction well. Escorted home by a police car that parked in front of our house? Oh, the scandal!

We had to go to court the next day and explain to the judge what happened. I told him my story, the traffic cop acknowledged the general accuracy of it with some stuttering, and the judge said I was right and sent me and my mother home. She, on the other hand, didn’t let me off quite so easily.

There are other stories about that car. The drag race with the Studebaker, my step-father’s belief that Ford made the cheapest clutches in the world because his kept getting worn out, etc.
All-in-all, a very good start to my driving career.