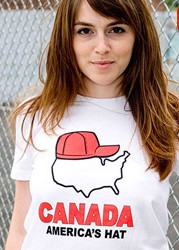 I do a lot of business in Canada. I like the country, I like the people, and Canadian dollars spend as well as American ones. Occasionally, better. But Canadian hospitality has reached a new high with my latest trip.

Yes, I was assaulted. I can finally scratch that off my bucket list.

My client here is in a Toronto suburb, and I stay at a nice, mid-level motel very close to their office. I’ve stayed there many times before, and I will again. They serve a nice buffet breakfast, and when I went to eat this morning, I was greeted by yelling from the lobby. When I got there, a clearly pharmaceutically-enhanced woman was terrorizing the desk clerk and shouting obscenities and breaking anything she could get her hands on, including ripping the security camera out of the ceiling.

She briefly went out the front door and the alert clerk tripped the electronic lock. Now, when I say pharmaceutically-enhanced, I’m not exaggerating. She attacked the door, and won, flinging it open in triumph and carrying on like she’d just knocked out Mike Tyson. Which I guessing she could have at that moment. She proceeded to celebrate by shouting more obscenities, breaking anything she could find, threatening guests, and generally making a nuisance of herself. She even accused me of being a lawyer!

Three of us hung around as the clerk called the police and tried to contain the damage. We were concerned for his safety but didn’t want to provoke anything, so we waited on the fringe of the action. When the police arrived, she chased the clerk to a corner of the dining area away from the door. And, of course, the door was locked.

So here’s the picture. The clerk is cowering in the corner with crazy lady threatening him, the policeman is at the glass door watching and trying to get in, and the three of us are in the hallway near the lobby. And just to prove my pharmaceutically-enhanced opinion, the policeman could not get the door open, although he tried with much vigor. Apparently not being as bright as she gave me credit for when she accused me of barrister status, I hustled to the door to let the cop in.

That was when I was cross-body blocked by a linebacker that I hadn’t previously noticed. After bouncing off the wall, I looked to see the linebacker was nowhere in sight, but crazy lady was shaking her fists at me and offering to perform some ad hoc dental work. The policeman intervened and my teeth were spared. Good thing because I don’t have dental insurance.

Everything after that was anti-climax. She continued to shout as they subdued her, accused everyone of rape and bigotry, confessed that she was on probation for assault, and said she loved the pain of handcuffs and body slams to the floor. While lying face-down with a policeman holding her there, she did a Meg Ryan in When Harry Met Sally and claimed to be sexually excited and having an orgasm.

All in all, a very entertaining morning.