Live on the Internet…

And you can pull the trigger.

The Rehabinator shreds the bricks and beams of a rowhouse, and the drug dealer standing in front of it. The controlled lightning of the Pediphryer locks onto an infamous pedophile, thrashing him around like a rodeo cowboy on an angry bull, and cooking him to just about medium-rare. The Musliminator blasts a three-ton SUV off the ground, and gravity returns it, leaving the terrorist and his entourage looking like charcoal.

Screenshot is on the air, and the paying public lines up to watch the carnage he designs. A crackpot scientist holds the key to bursting this dot.com bubble, and a free-lance writer and a rogue FBI computer geek must use it to unlock the secret of his identity.

As they get closer to the truth, Screenshot targets them for a new weapon. And the FBI itself thinks they’re involved. The race is on, and second place is last place.

SCREENSHOT – where virtual reality gets real. 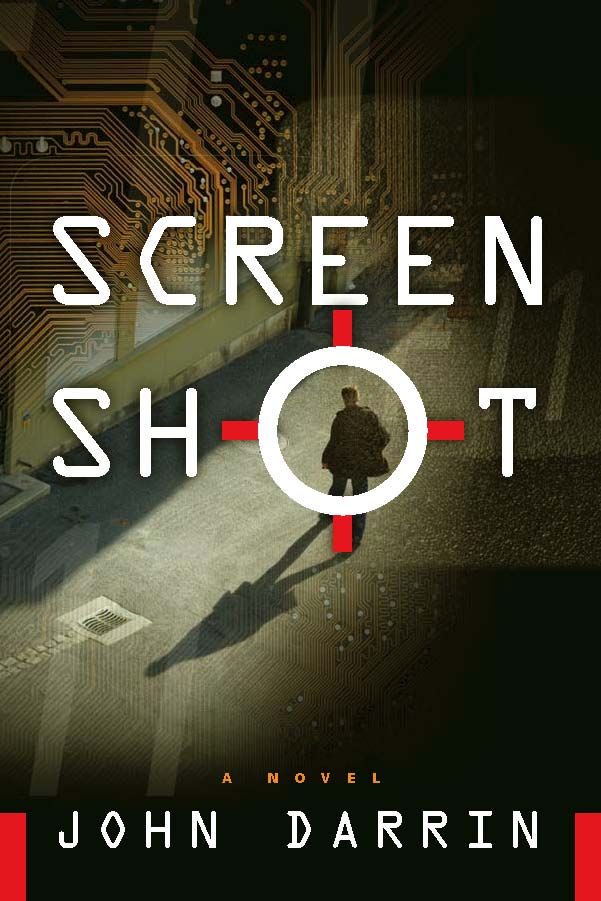 Readers of the techno-thrillers like Daemon, Zero Day, and The Hunt for Red October.

Readers excited by compelling Internet crime and the exploitation of anonymity.

Book 2 of the Seth Mathias Trilogy.

It was only a matter of time before someone took that next step in the digital world: murder, broadcast over the Internet for all the world to see. First a drug lord goes down, then a pedophile, then a mobster. The public is at once incensed and intrigued; the vigilante aspect—the victims are bad guys, after all—somehow makes the spectacle less appalling and adds to the sicko entertainment factor. When the killer announces that he will accept bids for the right to pull the cybertrigger for the next execution, the online world ponies up.

The only ones who can stop the madness, apparently, are disgruntled FBI investigator Karen, freelance journalist Seth, and gifted but
overlooked scientist Dr. Sicals. The unlikely trio joins forces to prevent further killings, and the pursuit keeps readers on
the edge of their seats. The central question of whether killing one for the greater good of many should be tolerated is treated
with a bit of a heavy hand, but the author’s message doesn’t distract overmuch from what is a satisfying debut thriller.

I picked this book up before I boarded a plane to Florida. I was told the ride was turbulent and that babies were crying endlessly. I didn’t feel or hear a thing because I was so engrossed in SCREENSHOT. I was hooked at the start when Seth Mathias is invited to witness to a murder broadcast on the internet. Mathias thinks his son, a computer guru, sent him the URL, but the son says no, someone must have stolen his email. And then, Mathias is off and running after a multi-billionaire techno-thrill-killer who has targeted some of the worst deviants in society–along with Mathias and a few other innocent bystanders. A journalist, Mathias is not completely without resources and contacts, a major oversight on the part of the villain, especially when the connections include an FBI agent with a personal agenda and a computer genius with a deep-seated grudge against the Nobel Prize Committee. If you hate flying as much as I do and are looking for a quick, fun read, pack SCREENSHOT for your next trip and you’ll be “having some fun,” too.

It is distressingly true that most first novels arrive with all the impact of a butterfly emitting gas over the Grand Canyon, but here is one that deserves a much better fate. The concept is fantastic – the killer selects victims we all detest; child molesters, drug dealers, terrorists, and then every Tuesday broadcasts his assassinations live on the net – and from the opening scenes to the gripping denouement, the story never fails to gain momentum. What more could a reader ask?

Adding just the right note of humor, the killer uses “Acme Co.” devices – modeled after Wiley Coyote’s classic cartoon contraptions (that never worked) as Wiley struggled to ambush the Roadrunner – but in this case the devices are humorously innovative; the ACME DRUG REHABINATOR (used to kill an evil drug dealer), and the ACME PEDIPHRYER (a violent pedophile)- and always work perfectly. They become the first of a string of imaginative and very deadly remote-controlled weapons designed and built by the killer, and of course his fans quickly number in the millions.

Enter Seth Mathias, a man with a violent past, chosen by the killer to be his spokesman, and FBI special agent Karen Larsen, head of the elite anti-phishing group, and throw in would-be Nobel prize winning vitriolic computer genius Morgan Sicals, and you have the ingredients of a formidable task force with one goal: identify Screenshot. Except, they must do it all off the reservation. They make the decision to go for it but their best plans prove insufficient; the enemy is truly brilliant, and there is no way to trace him, or is there?

The reader is held in almost unendurable suspense as Seth, Karen and Morgan persevere through setback after setback, all leading to the fantastically tense and cliffhanging finale.

In case you don’t get it, GET IT: Screenshot is the best novel I’ve read in many a moon. Highly recommended.