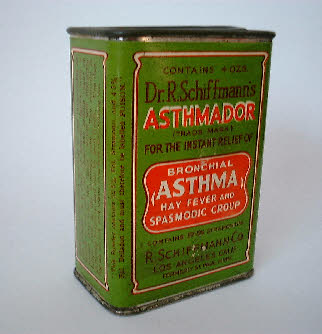 I don’t have asthma, and I never did. But that doesn’t mean I’ve never taken asthma medication.

College sure was fun. Good friends, bad grades, momentous hangovers, glorious road trips, and even some knowledge gained. And lots of stories.

This one started senior year, in our four-man apartment. David, our resident pre-med study machine, discovered Asthmador in the Journal of the American Medical Association. Asthmador was an olive-green powder meant to be burned like incense, and the smoldering fumes inhaled to clear the respiratory system. According to the article he found, when mixed with a liquid and ingested orally, it resulted in “mild, hallucinatory euphoria.” That was all we needed to know.

The first step was to acquire some, and I saw two problems with that. First, it would cost money, probably a lot of it, and I didn’t have much. Any, really. Second, a bunch of college students traipsing into the small-town pharmacy, none of them wheezing, and buying Asthmador was bound to attract attention. Law enforcement attention, in my mind. Asthmador wasn’t a prescription drug, and drinking it wasn’t even a misdemeanor, yet I imagined local police (with whom I’d had experience – see My Life of Crime Part 1) would know something was up and we’d be under 24-hour surveillance.

So, it was decided that the others would pitch in and go buy it, and I would be the guinea pig and drink it. I waited in the apartment, ready to beat it down the back stairs when the SWAT team showed up. Instead, my roommates returned with what looked like a tin can of Nestle’s Quick, complete with the pry-off metal lid, and told me no one even noticed. It was about a pound of powder, and it cost something like 89¢. So much for money; so much for cops.

David took charge and made it into a scientific experiment. He measured the powder and mixed it with orange juice, using ratios he didn’t explain. The yellow juice and olive powder combined to make a soft pastel green drink, and a tentative sip revealed a sweet, creamy orange flavor – quite tasty. Maybe it was the bella donna.

Under David’s scrutiny, I drank half the glass and he noted the time. And then, in order to fully demonstrate just how foolish I was about the whole process, I drank the rest. I didn’t really hallucinate, but that’s probably because David was cautious with his ratios. I didn’t die, either, which definitely means I didn’t drink enough of it.

I spent the next four or five hours horizontal on the day bed in our living room, eyes closed, not moving a muscle, paralyzed. A party developed around me, and I could hear everything with extraordinary clarity, I could smell every cigarette or joint or perfume. I don’t know if I could feel, because I didn’t even try to move. Michael, our guitar-hero friend, seemed to be the only person who noticed me, and he was very concerned. He sat and talked to me, he asked over and over if I was OK. I didn’t answer. I just lay there in my eyelid-sealed solitude just enjoying seeing the sounds.

Today’s lesson in cause and effect is that if you drink poison in sufficient quantities, you will die. We were all well aware of that, theoretically, at least, but it never occurred to us to check the Asthmador label and see what we might be drinking. Later, when it was all over, we did, and found the active ingredient was the aforementioned bella donna. The same stuff Duncan the First of Scotland used it to poison the entire invading Danish army in 1035. I’m not making this up. King Sven was pissed.